Nolan is currently obsessed and I do mean obsessed with the Incredibles.

When I was at the Asics store a couple weeks ago they had a display of Incredibles themed shoes. I took a picture and showed Nolan, ever since he’s been asking about the shoes.

We only brought Nolan two pairs of shoes and his Nikes are wearing down quickly. Jim and I decided, why not, let’s take him to get the Dash Asics. So Nolan and I rode our bike to the Asics store today.  As soon as we arrived, he didn’t give me time to lock up the bike before he was in the store and asking a sales clerk about the Incredibles shoes.

“Excuse me, where are the Incredibles shoes.”

Sadly, the Incredibles display had been taken down. But Nolan didn’t let that stop him, he asked the sales guy, Luuk, to show him all the shoes. “Where are the Frozone shoes? Now show me the Mr. Incredible Shoes?  And what about the Dash shoes.”  He had his own personal sales guys shoe him around the store.

Nolan did try on the Dash shoes, which entailed running around the stores to test out how fast he could run and asking Luuk, “How fast was I?” Sadly, the shoes were much too big, so he wasn’t able to get the official Dash shoes. However, Luuk did help Nolan find another pair that he liked.

Before we left, the Nolan asked, “Why did you take down the Incredibles shoes before I could see it?”  Luuk was so sweet, he apologized and said: “Wait a minute, I might have something even better.”  He disappeared into the back stockroom for about 3-mins and returned with an Incredibles dress-up kit.

Nolan was thrilled and asked Luuk to help him put it on. I, of course, was not allowed to help. It was a pretty special experience.

Nolan proceeded to wear the Incredibles dress-up kit the rest of the day. 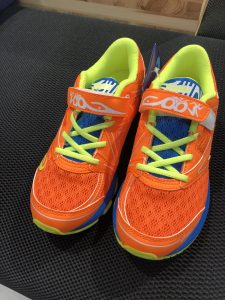 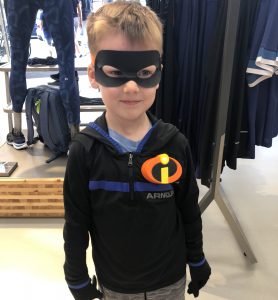