In London, Faith was one of my harder topics to write, but in Amsterdam, I think it’s going to be one of the easiest.

So here’s the thing about the Dutch, they are not a religious culture.  It didn’t take me long to realize the lack of churches in the neighborhood around our house or in the city.  The lack of churches was noticeable enough that I started researching very early in our trip. According to the iamsterdam website, ” A survey from the year 2000 reports that 60% of the adult population of Amsterdam professed no affiliation with any church or other religious or ideological movement. ”

While biking around the city, there are big beautiful churches, but most of them don’t actually offer services anymore. “Many churches have been abandoned or have acquired secular functions, some have continued to serve religious functions.” Though the religions functions are either a very limited weekly service schedule or perhaps only special event services.

As for what does Sunday mean in Amsterdam, I took myself for a run this past Sunday morning. I went out around 10am and took my typical loop in the forest. It didn’t take me long to realize the forest was noticeably busier, which made me even more aware of the people. I would say easily 5-times as busy on Sunday morning at 10am then at any other time I’ve been in the park. It wasn’t just individuals either, it was groups of people, families,  or couples walking, running, biking even horseback riding in the forest.  Though not in a church, it was almost as though the community was having a collective walk in the forest to slow down and appreciate the quiet.

Most people that know me, know that I was raised in a conservative Christian home and church was always a weekly tradition for our family.  Even though my twenties and in the early years of marriage, I still attended church regularly It’s really only been in the last 7-years that I’ve really struggled with “church,” though I would not say I am any less bound by my faith and believes.  For me, I feel most connected to my faith and God when I am in nature. I think maybe that’s why I am drawn to being outdoors and in the wilderness.  I find that I get anxious when I spend too much time in a concrete jungle (such as London).  I provide this bit of background before saying, I feel even more at home after this past Sunday in Amsterdam. There was something communal about running in the forest on Sunday.

I will continue my research and may post a follow-up.  We’ve had the opportunity to meet our neighbors here in Amsterdam and if possible, I’d like to get in a coffee with our neighbor and talk with her a bit more.

Here are a few photos of churches around Amsterdam. 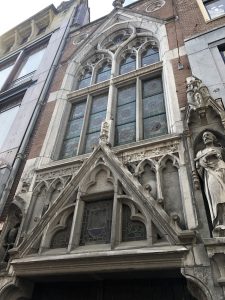 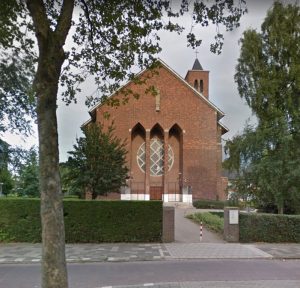