It’s hard to believe, but we’ve now officially settled into our fourth new house.  After such a great month in Amsterdam, Jim and I were both feeling a little leery about our move to Kyiv. I’ll be sincere, our first couple of days in Kyiv were rough.  Both Jim and I had many moments where we looked at each other and said, “what were we thinking?”  The language is hard, the house is a rough layout, the grocery stores are a challenge, the people aren’t very friendly, and on and on and on.

Then I recalled the entire purpose of the good ole’ check-in list is to ease the stress and anxiety of landing in a new city. I gave myself a pep talk and got to work:

Step 1: Assess the living space.
Step 2: Get the suitcases unpacked ASAP!
Step 3: Set up our workspace.
Step 4: Verify the coffee situation … a few other things.
Step 5: Make a shopping list and run to store.
Step 6: Research and create a running map.

We are now officially 6-days in, and we’ve turned a corner.  We’ve had an attitude adjustment, we’ve settled in, and we are happy we are here and really looking forward to our time in Kyiv.

So let me give you a tour of our home in Kyiv!

The Kyiv house is an apartment located in the heart of Kyiv in an area called The Maidan. The apartment is located on the third floor of a very old building with no elevators, so yep, that means lots of stairs. Lugging our bags and suitcase up three flights of stairs was a great way to start our visit.

The apartment itself is basically one large open living space with a kitchen and living area combined.  There are two huge, luxurious bathrooms, and three bedrooms. Two of the bedrooms are on the main floor, and the third bedroom is located up in a loft area with no windows. The house does have air conditioning units in the main living space and in the master bedroom on the main floor, which is refreshing after not having any air conditioning for the last 2-months. The home decor is interesting, to say the least.  When we arrived the homeowner was there to greet us, and she actually apologized after meeting Nolan.  Jim and I both laughed, and we’ve fully embraced the apartment as part of “living like the locals.”

The kitchen is small and not well stocked. There is a single large pot and a single frying pan, very few dishes, no towels, no spices/oils, or any supplies of any kind. The refrigerator is a standard size with an actual freezer, which is really lovely.  There isn’t a dishwasher, so that means, I get to do the dishes, which is fine.  Upon further investigation, I did learn the oven does not actually work, but we do have a nice size toaster oven, so we’ll see how that works out.  The coffee pot provided was a single-serve cup. I made it about 3-days before finding a replacement full-size coffee maker!

The bathrooms are beyond impressive. Both bathrooms have really cool jacuzzi type tubs/showers with lots of fun features, and both have a bidet, which is an unusal addition. The ceilings in both of the bathrooms also have really cool murals and of course, chandlers, because every bathroom should have a chandler, right?

There is a washer in the apartment, but no dryer and I personally really don’t love the crusty feeling of air dried clothes. I was, however, fully prepared to do laundry until the owner offered to have the maid take the laundry. Initially, I said no, but after additional research, I found a delivery laundry service that will pick-up, wash/dry, fold, and delivery 10kg of laundry for $14, so that was a no-brainer. We’ve actually already used the laundry service once, and it was super easy. The clothes smelled lovely, and they were folded so we will be using a laundry serve while in Kyiv — so high class, right?

Now —  let’s go back to the owner mentioning a maid. Yes, there is a maid that comes to the apartment every 4-days to clean and change the sheets, also super high class and not something we were expecting. Again, at first I was tempted to say no thank you but decided 1) the maid likely depends on the work, so by saying no, she isn’t going to get paid, and 2) the floors are hardwood, so they defiantly need to be swept regularly, and 3) personally, I hate cleaning bathrooms, so it’s a personal win for me not to have to clean them. Thus far, the maid has come once, and it’s lovely.

Jim and I have also both settled on office spaces. I  set up my office in our bedroom as I did in London.  I have a lovely window, so I’m happy as a clam. I picked up my candle from the store, and I’m off and running for work.  Jim temporarily set up his workspace in the living room, but that didn’t end up working well as it’s a large open space and when he’s in a meeting, the kitchen and living area become a “quiet zone” and that’s tough for Nolan. Jim did some research and found a co-working space that is only about 5-mins from the house and only $250 for the month.  It’s open 24-hours, 7-days a week, so he opted to set up his office there for the month.

DISCLOSURE: You will likely laugh, cry, or cringe, but I’m gonna give you the full tour of the Kyiv house.

Building Entrance, Stairs, and the Apartment: 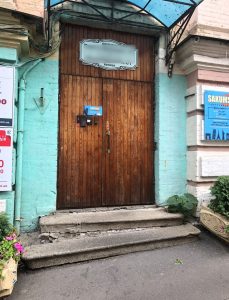 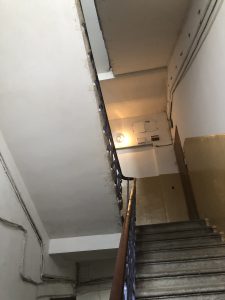 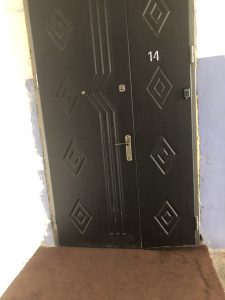 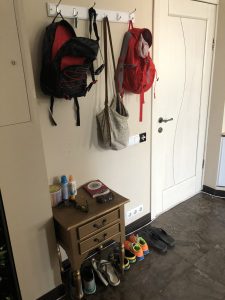 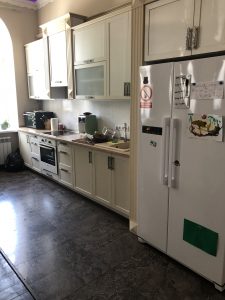 ^Kitchen in the open living area. 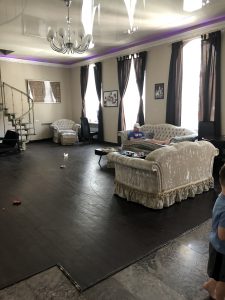 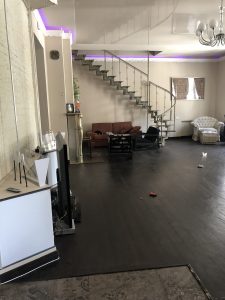 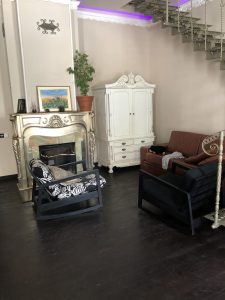 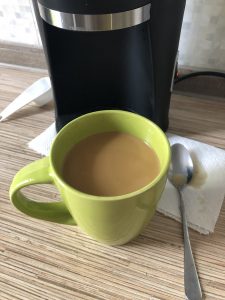 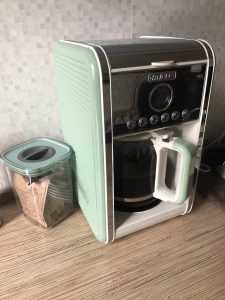 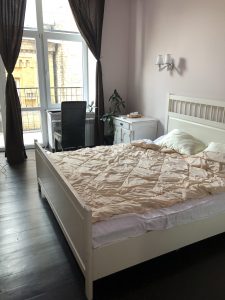 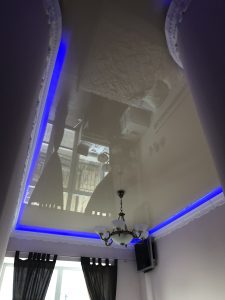 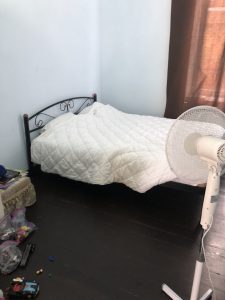 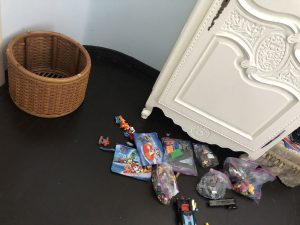 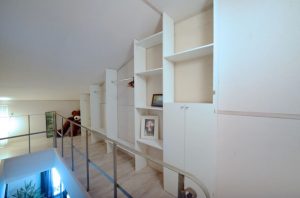 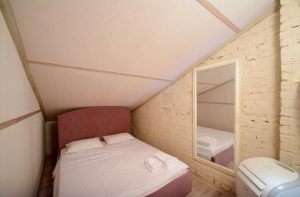 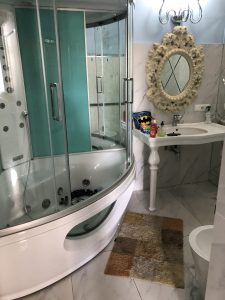 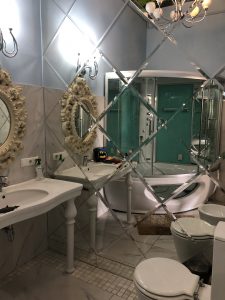 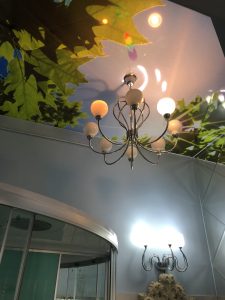 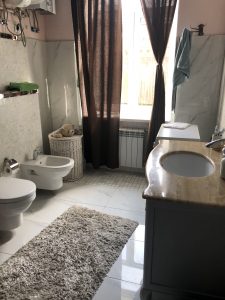 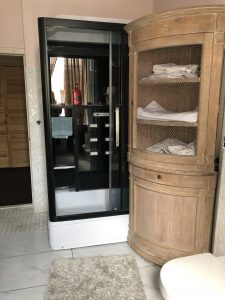 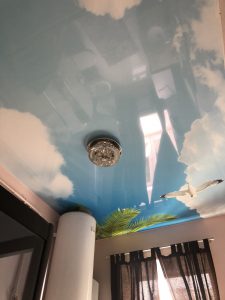 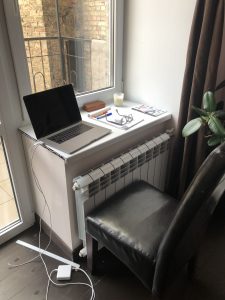 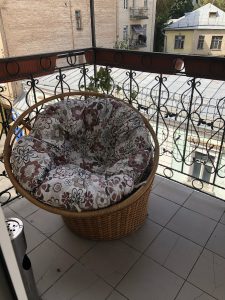