We’ve tried to keep up the fun tradition of the holidays while traveling and Easter was no different. Being in Australia, we had tons of options and overall, it was an amazing Easter weekend.

First, I gotta say, I was totally impressed with the Easter holiday in Australia. Most all businesses were closed both Good Friday and Monday was an actual national holiday. I thought it was a nice change to see an entire country truly embrace a shared holiday and take time off with family.

Jim had already planned and booked his dive trip to the Great Barrier Reef, so Easter Weekend was a 4-day long celebration for just me and Nolan.

On Friday, we went to the Easter Show in Melbourne. I had seen signs everywhere for the Easter Show and based on my research, it seems like a great option. I would compare the Easter Show to a county fair back in Indiana. I pre-purchased an unlimited rides wristband for Nolan for Friday and our plan was to enjoy all the rides from 11am to 3pm.

We took a break for a corndog, which was nothing special — Australia’s got nothing on American’s Fried Foods — and then Nolan was back to the rides again. He took full advantage of the unlimited rides and enjoyed every minute of the day.  As our last stop of the day, we visted the “show bag” booth, which was honestly, a pretty cool offering. Think of a “show bag” like a pre-packaged Easter basket.  There were a least 50 different bag themes and not all were candy, some were toys.  Nolan took a very long time before settling on the Trolli bag, because according to Nolan, “I can share it with Daddy.”

We arrived back home around 6pm, just in time for a quick shower before our pizza was delivered and we watched Marry Poppins to close out our day. Even without Daddy, Nolan insisted we keep up our Friday night pizza and movie tradition.

Finally, our day wasn’t complete without a “sleepover.” Nolan asked if I could sleep in his room and since Jim was gone I gave in and slept in the second twin bed in Nolan’s room.

On Saturday, we headed to the Rec Center in Kew, which has a really great pool and a huge water slide. On our way, we saw a really cool airplane drawing in the sky. Nolan was fascinated by the entire processed and had questions I was not capable of answering, which warranted an emergency phone call to Uncle Doug for a few much-needed answers.

Nolan played in the pool from 11am to 4pm and though I asked him several times if he was ready to go, he insisted he wasn’t and so I let him play. There were lots of other kids coming and going, so he had no shortage of playmates in the pool and he went down the slide no less than 30-times.

After the pool, we stopped into the Coles, picked up dinner, and headed home. While I made dinner, Nolan finished Mary Poppins. Since we skipped nap, Nolan was exhausted, so we called it a day early … and of course, Mommy had another sleepover in Nolan’s room.

On Sunday, Nolan woke up to an Easter Basket filled with candy, toys, and other fun treats. I made pancakes and bacon, while Nolan had a lazy moring playing Xbox and watching Netflix.

After breakfast, we went to see Wonder Park, which was a really great movie. Both Nolan and I were on the edge of our seats for the entire movie and we loved it!

When the movie was over, we did a bit of shopping and explored Melbourne a bit before heading back home for dinner on the BBQ. Nolan played while I made dinner and since we yet again missed nap, it was an early bed for both of us.

And of course … it was yet another sleepover in Nolan’s room.

On Monday, we headed back to the Easter Show for an Easter Egg Hunt. When researching the Easter Show, I thought doing the unlimited ride wristband and the Egg Hunt in the same day would be too much … which is was … so I left the Egg Hunt for Monday.  The Easter Egg Hunt was nothing like I’d ever seen and really cool. The Egg Hunt was organized by age group and different ages went at different times throughout the day. During Nolan’s session, he was giving a card with a pattern of eggs by color. Rather than a free-for-all, the kids were required to collect all the eggs by color to match their cards.  In addition to the colored eggs, each card also had a word.  The kids had to also collect eggs with letters on them to spell the word on their card.  It was actually pretty tough and some kids didn’t finish.

Since it has been three days with no nap, I wanted to get back on track since it was Monday, so we made it home in time for a nap — and yes, Mommy took a nap too!  I was equally exhausted after our very busy weekend.

Daddy got home after nap and Nolan enjoyed telling Daddy all about our fun weekend while sharing his Easter candy.

All, in all, it was a pretty great Easter weekend. 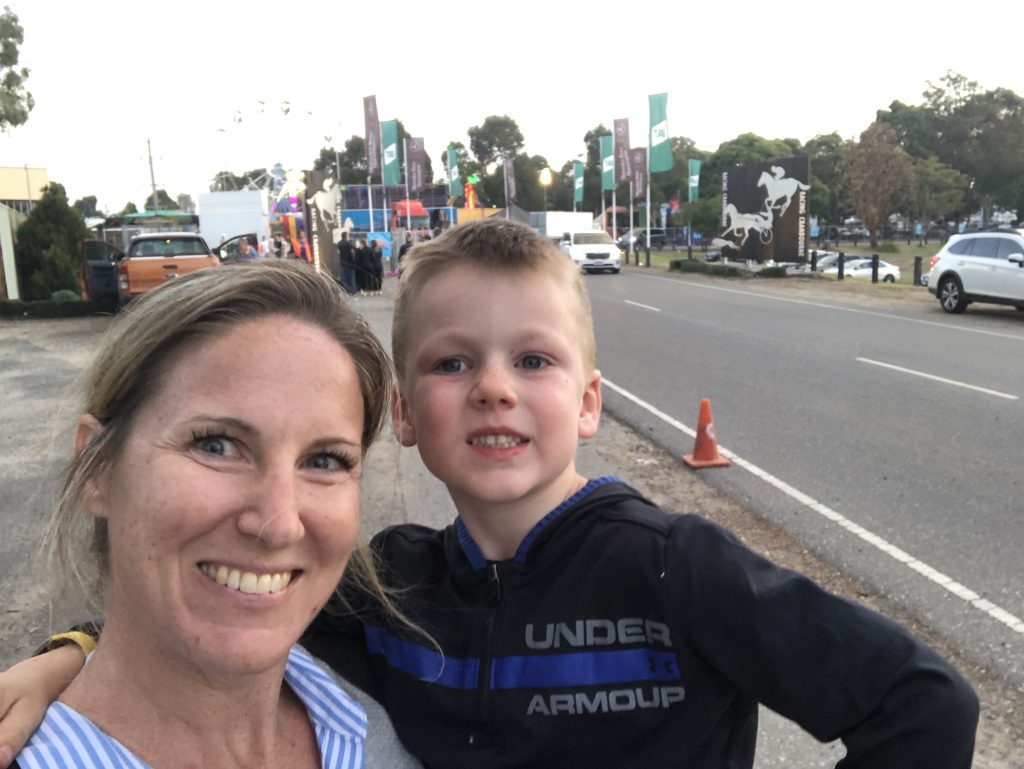 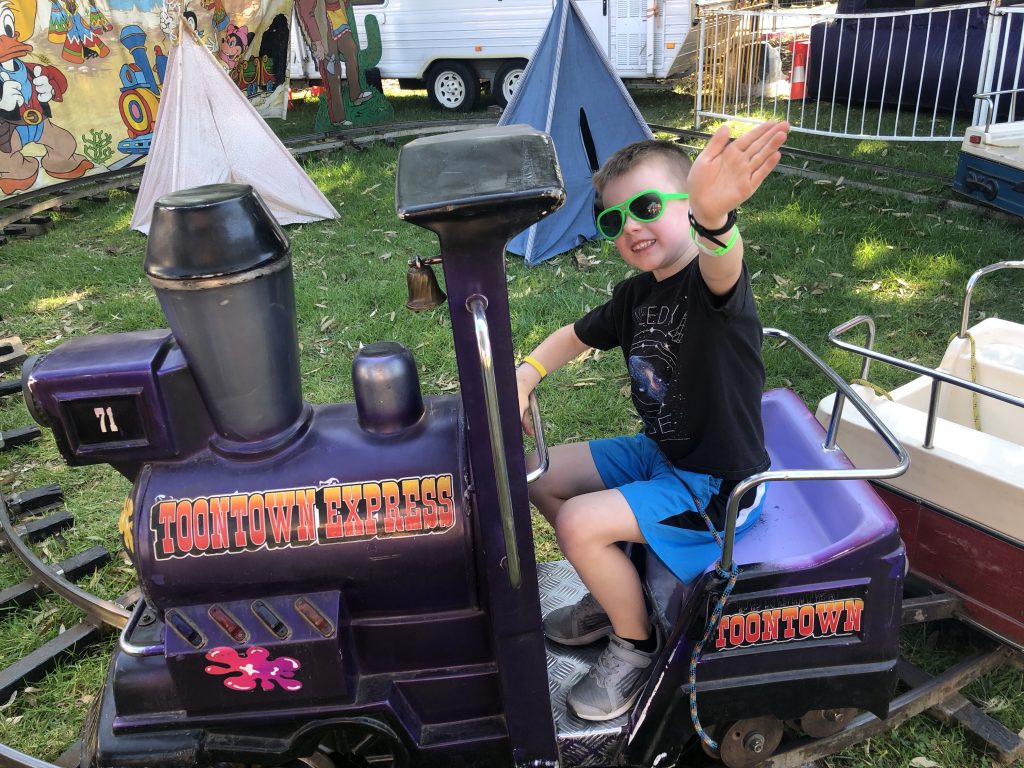 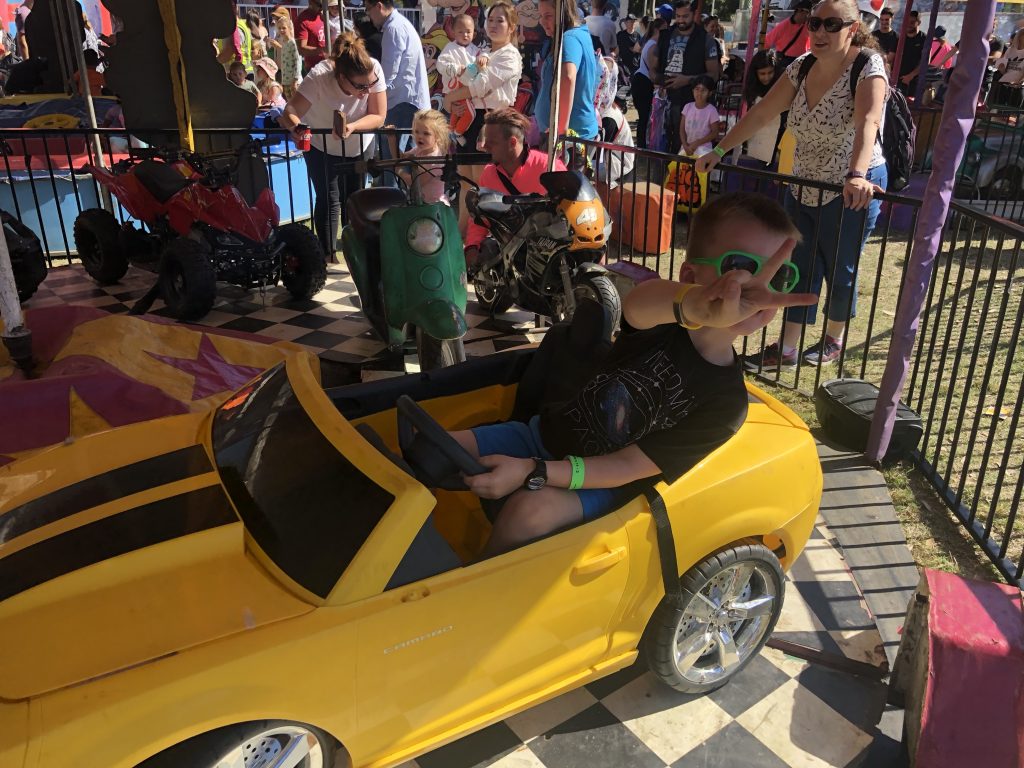 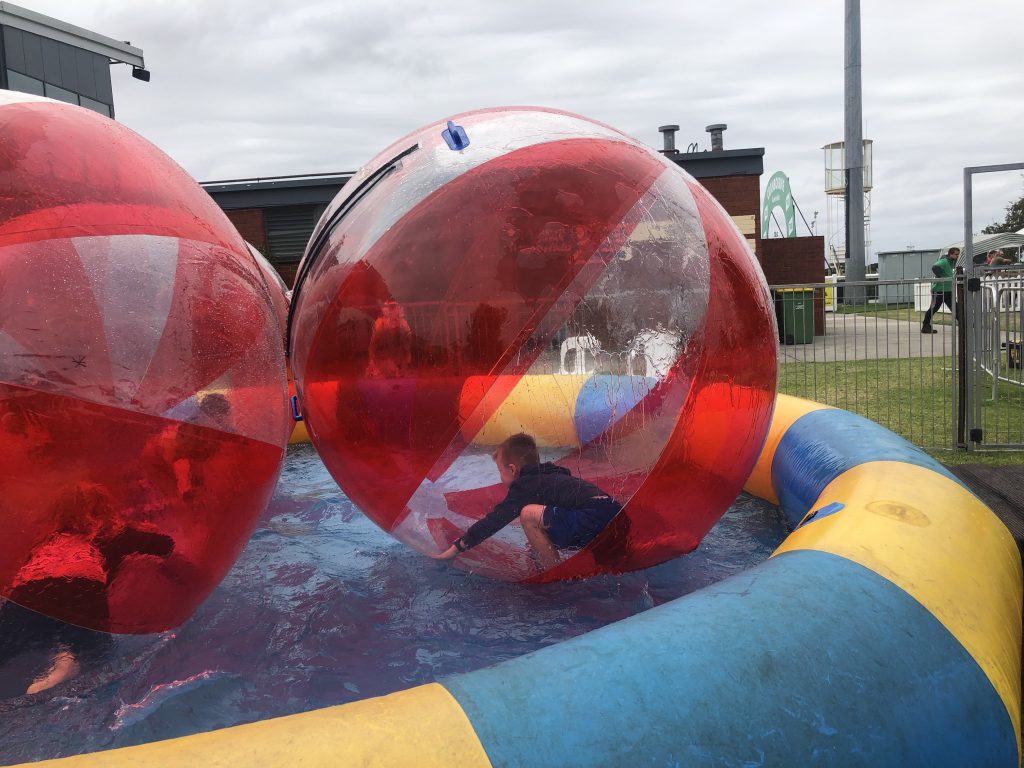 ^ Yes, this is a “ride.” It was basically a swimming pool full of water and then big inflatable balls for the kids to run on the water. 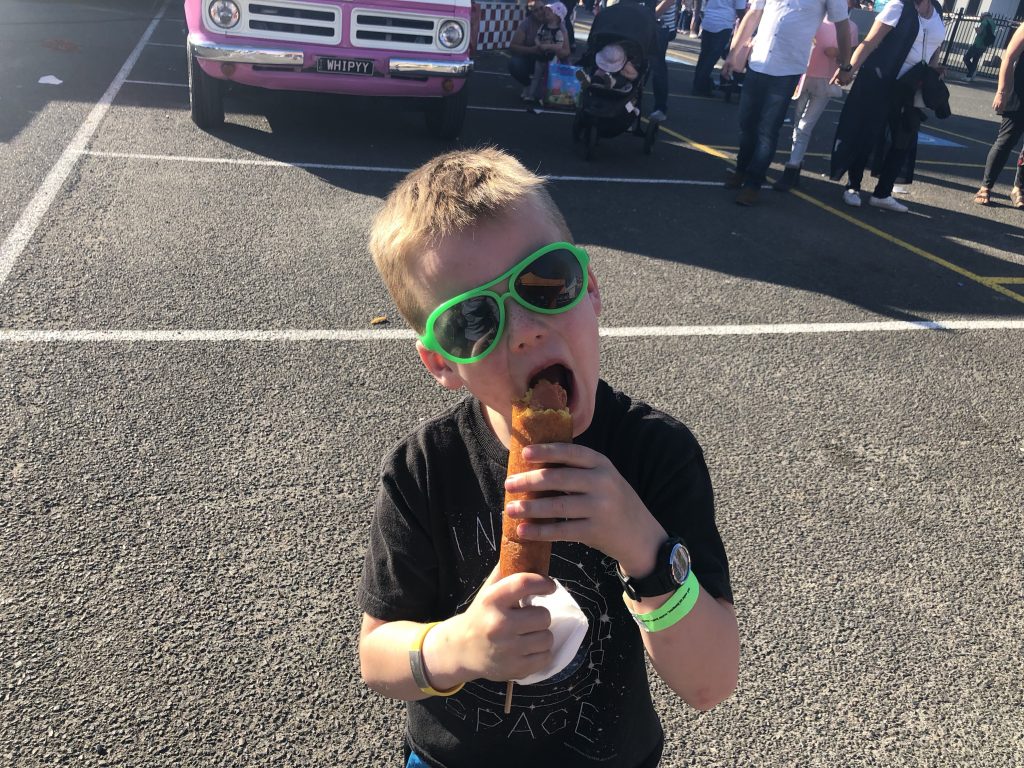 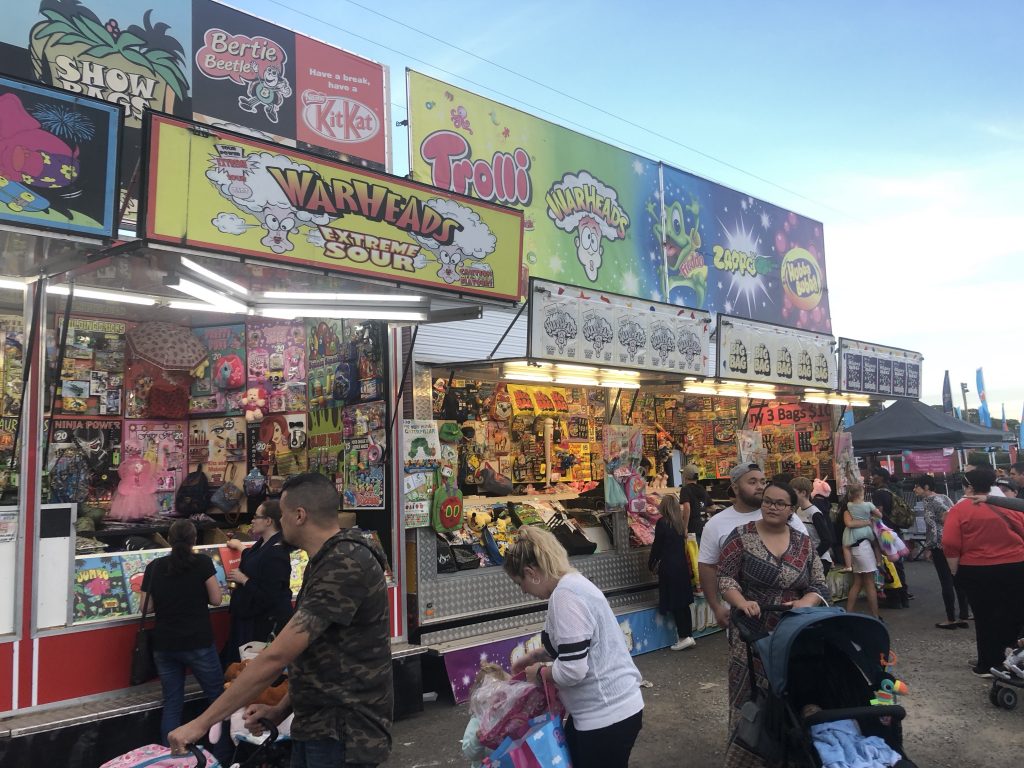 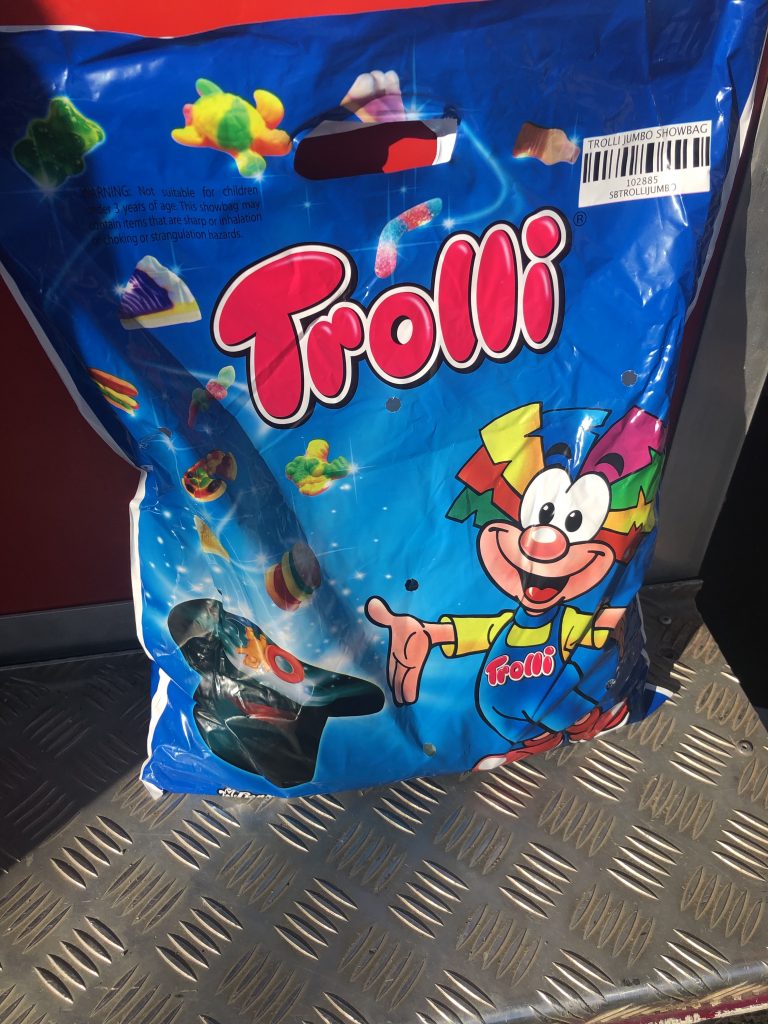 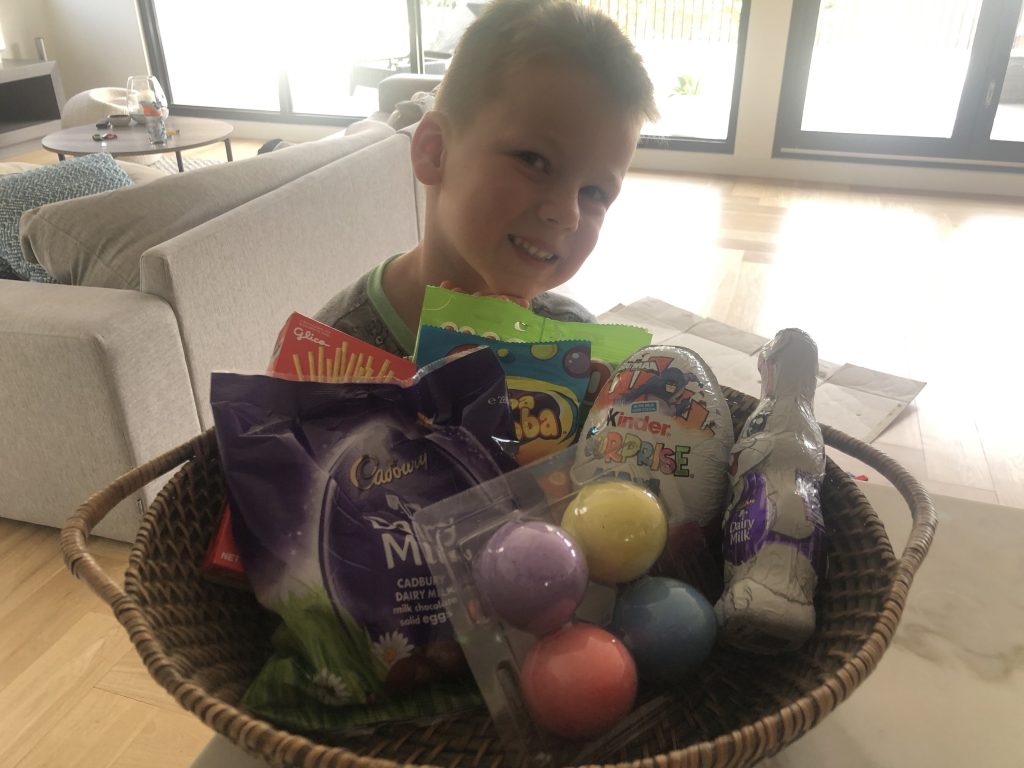 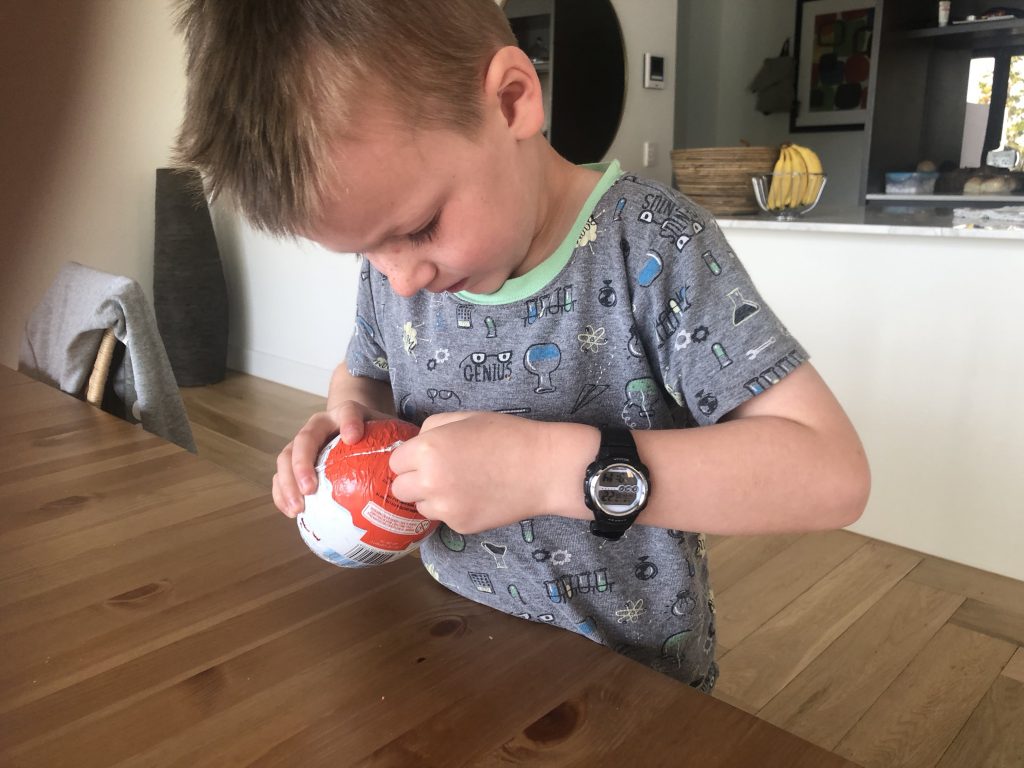 ^ He picked the Kinder Egg has his Easter morning treat. 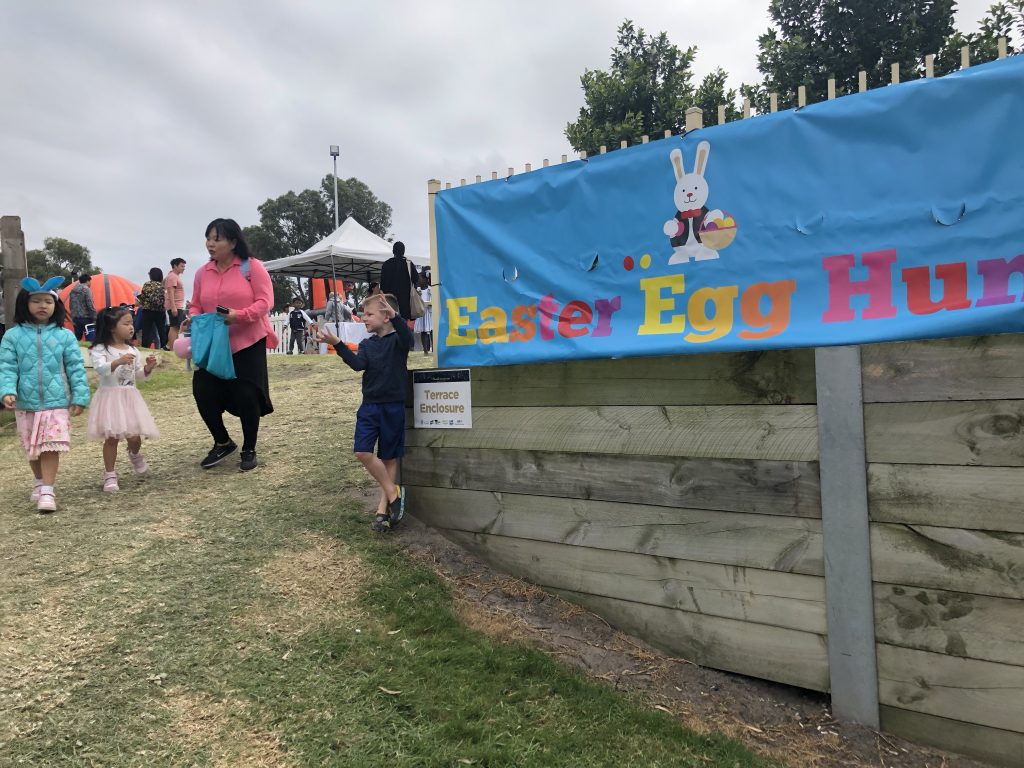 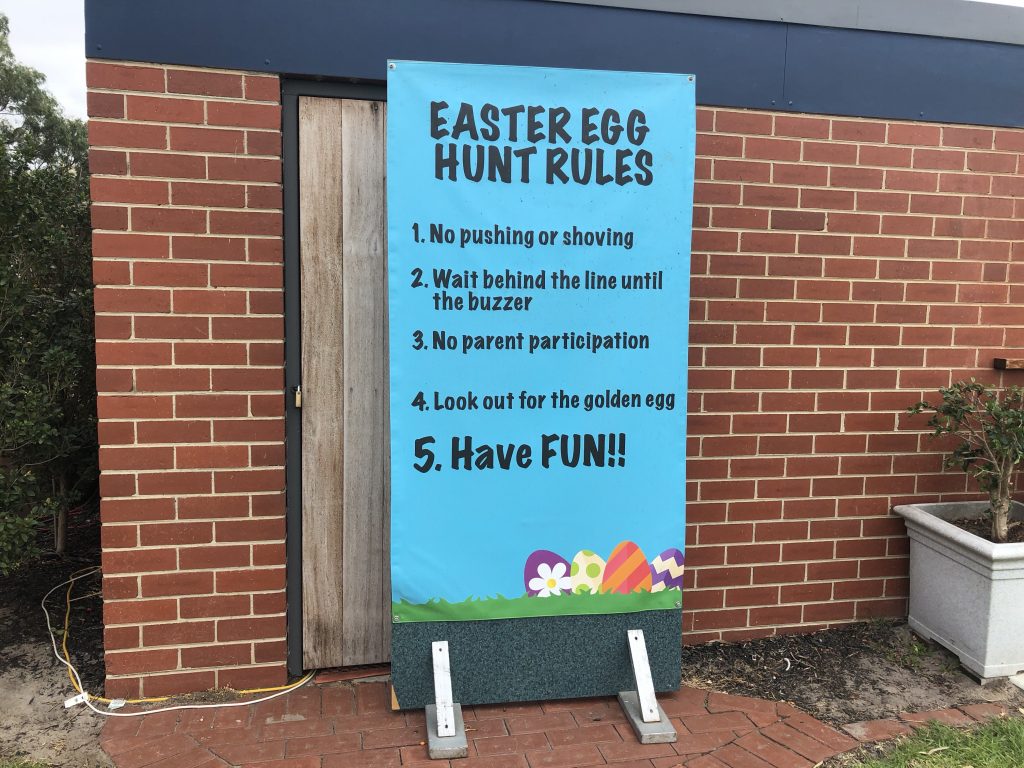 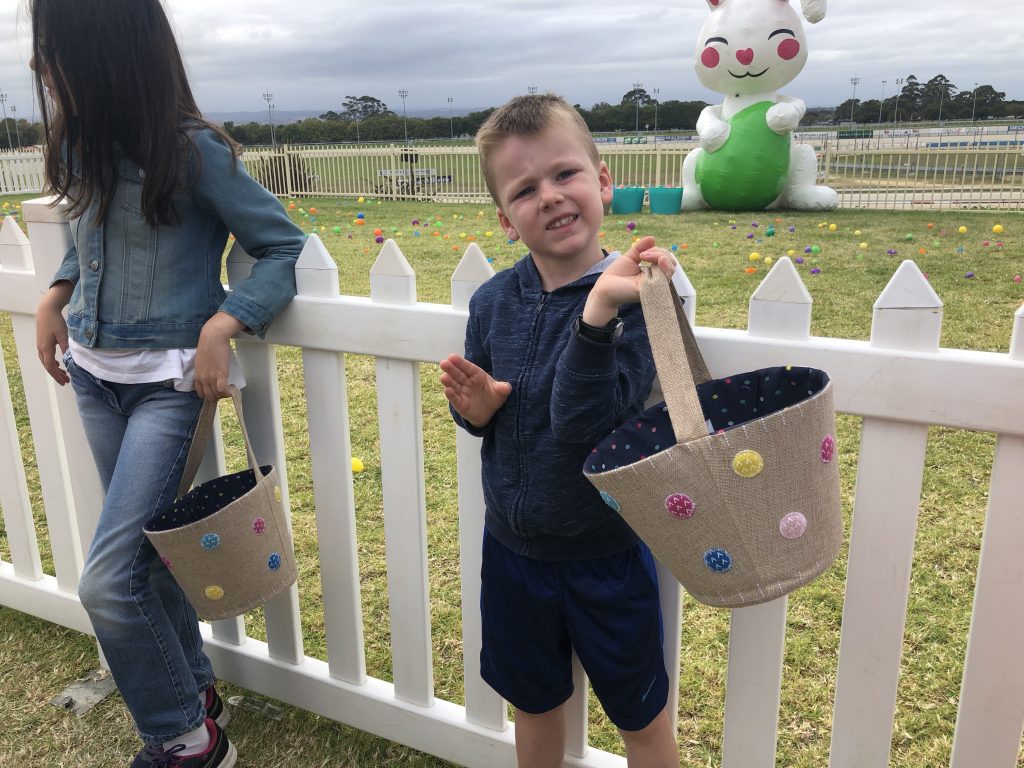 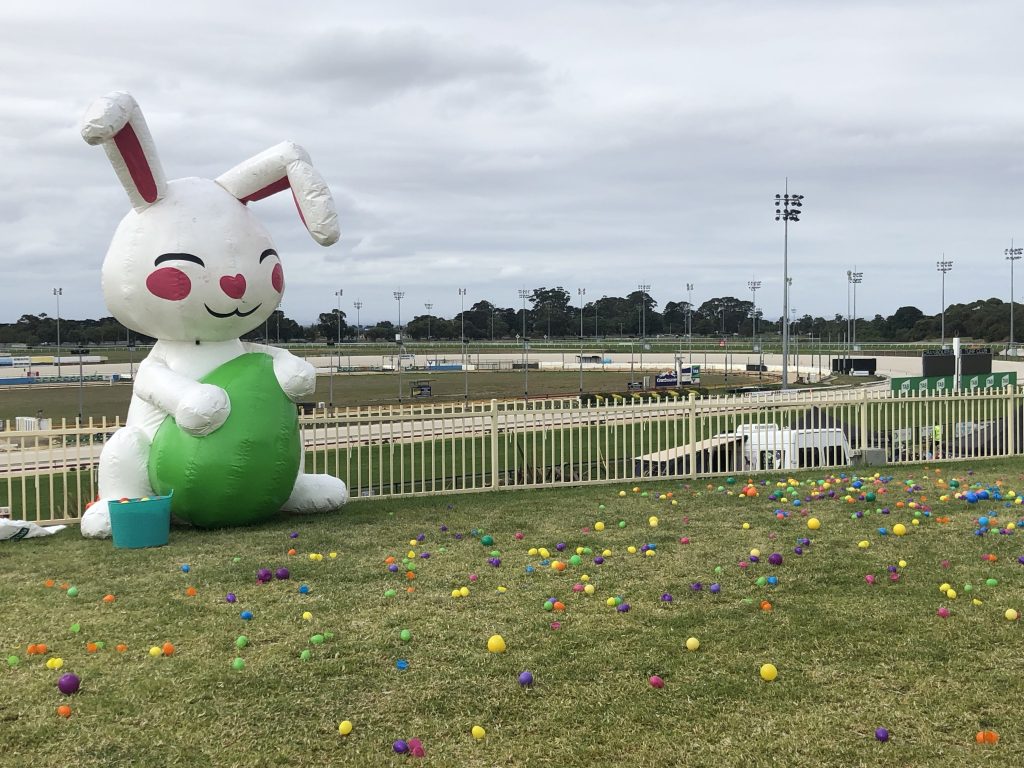 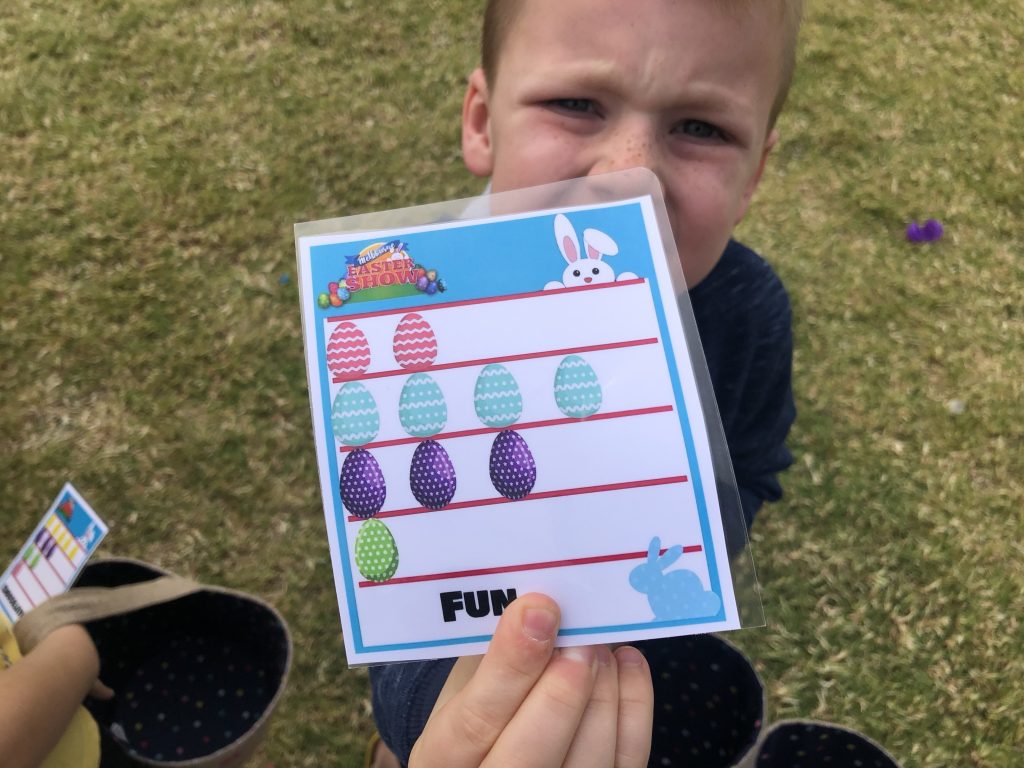 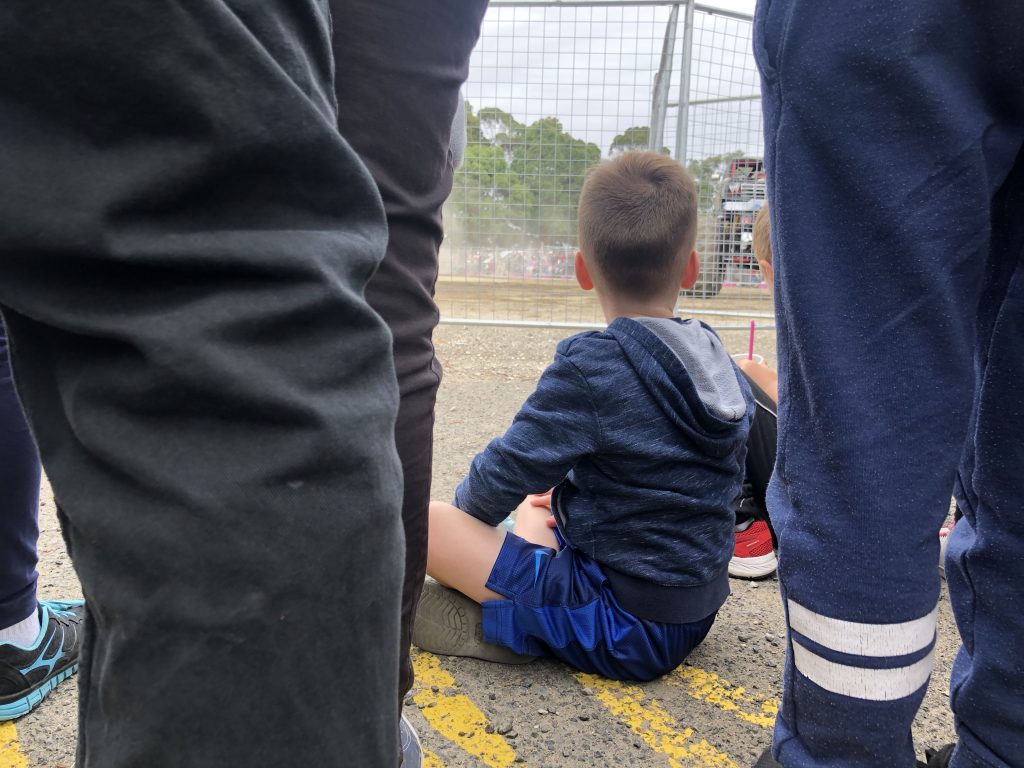 ^ This is totally Nolan. Why stand? He made himself comfotable while watching the Monster Truck Show.