Being in Kyiv has been very thought-provoking. It’s made me stop and realize how lucky I am to have been born in the USA.  I haven’t posted many blogs from Kyiv yet and honestly it’s because I’m a little overwhelmed by the city and people.

Before coming here, I didn’t know much about Ukraine. Jim and I compiled our list of countries with the purpose of visiting places that were indeed different than the US, and we hit the jackpot with Ukraine.  I’ve spent several mornings hunched over iPad, drinking my coffee, and reading about the country and its people.  I also found myself getting frustrated when mapping my running loop in Kyiv because there was a specific loop I wanted to run, but 1) it was longer than I wanted and 2) it was super confusing to get around the roads/paths.

The Ukrainian Revolution occurred in 2014.  That’s right, literally yesterday, 2014 folks.  The entire government has basically been rebuilt as of 2014.  The apartment we are staying in is one block from The Maidan, which is where the revolution basically happened.  Every time I walk through The Maidan, I can’t help but think about what happened less than 5-years ago.  Jim and I watched a really good documentary on Netflix, Winter On Fire. If you are interested in learning more, I would strongly recommend it.

To give you a little perspective, here are a few pictures from 2014. 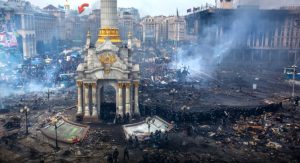 ^The red arrow is where our apartment is today! 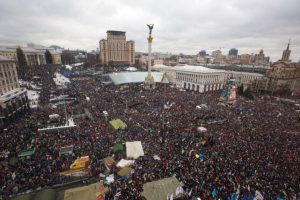 ^This is a photo of the protests from February 2014.

Before the Revolution in 2014, Ukraine had really only had 23 years of Independence. It wasn’t until 1991 that Ukraine officially adopted the Act of Independence and its first presidential elections took place in December 1991. There are still massive signs of communism all over the city.  Two of the most significant monuments are on my running loop; The People’s Friendship Arch and The Motherland Monument, which is why I was so committed to my loop. I had this profound sense of commitment to appreciate what I was running past.  These massive, beautiful monuments that are symbols of communism in Kyiv.  There are plans to remove both, by the way … but it’s extremely costly and time-consuming to remove them and so, they remain.  There is literally nothing to compare it to in the US.

To give you some perspective, here’s my running loop map. 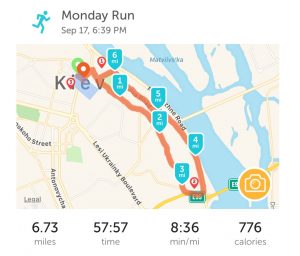 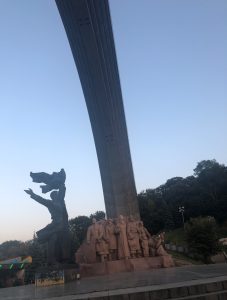 ^ This is The People’s Friendship Arch. 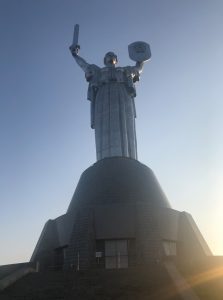 ^ This is The Motherland Monument. 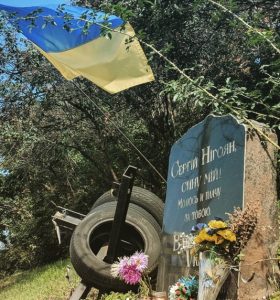 ^ This is just one of the grave stones I run past in my running loop.